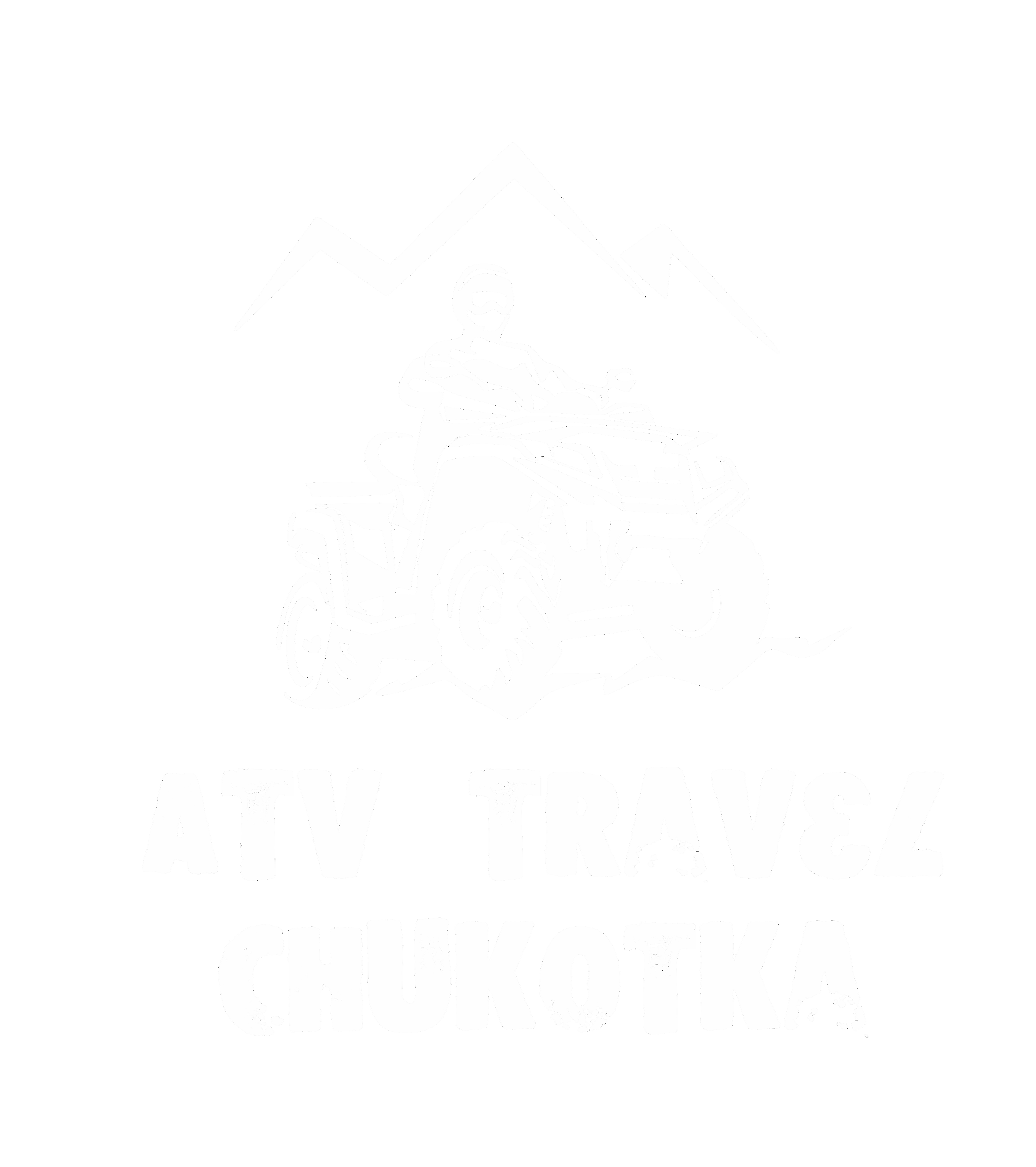 To begin with, this out the fourth ATV ride attempt. The very first one was undertaken by my brother Sergey and Oleg Kalyuzhny in October 2009. The attempt failed due to the sudden onset of winter and the lack of fuel.

In attempts number two and three, I was already part of the team. These attempts can be briefly described as a combination of extremely unfavorable weather conditions and some kind of fatal bad luck. There was everything – rain, a snowstorm in August, fog, torn cardans, drowned in the crossing of the quadra and some incomprehensible hopelessness. As if something kept us from going there…

For example, in the last attempt, when crossing the river, the forward quad bike got stuck and began to sink. Of course, the tide immediately began, washed the bike with sand, and well, in addition, the blizzard swept…

On our hands, swearing and hissing, chest-deep in water, we pulled the quads ashore, reanimated, turned back and literally after 200 meters we left the snow whirlpool into the sun… The gray haze we left behind swinged as if to say: “don’t go there, guys…”

So, attempt number four. Under the friendly reasoning of our comrades, “why even try going here again, you’ll just beat up your technique”, me and my brother decide to go alone.

Quad technique we got with us – Yamaha Grizzly 700 and Yamaha Rhino 700. Under Sergey’s reasoning that fuel, as well as cartridges, is either not enough, or not enough, but is no longer possible to take more, we fill up to the fullest. We pack products, weapons, and equipment…

Well, here’s the day of the departure. The weather doesn’t spoil us. It’s cloudy with occasional drizzle of rain. We cross the Anadyr estuary on a barge.

The first stop, as always, is the Bystryi closed mine. Now it is slowly becoming a kind of Mecca for Quad cyclists. After a quick snack, we move on. 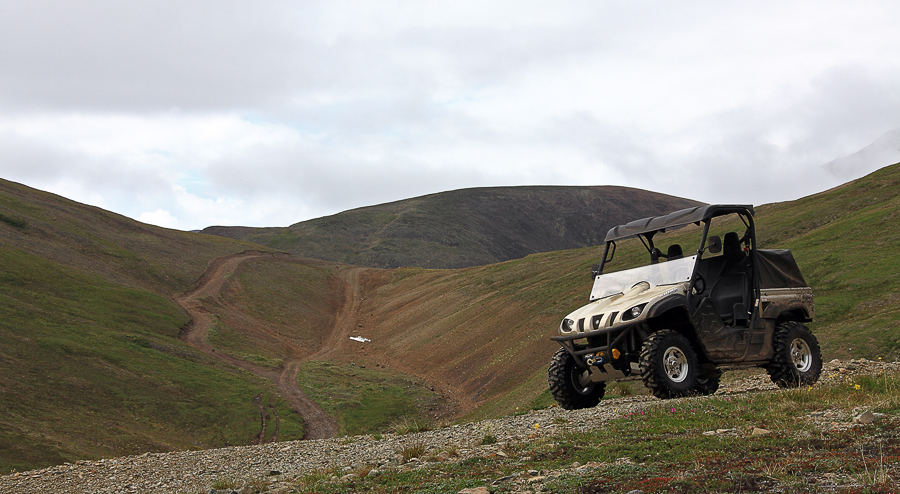 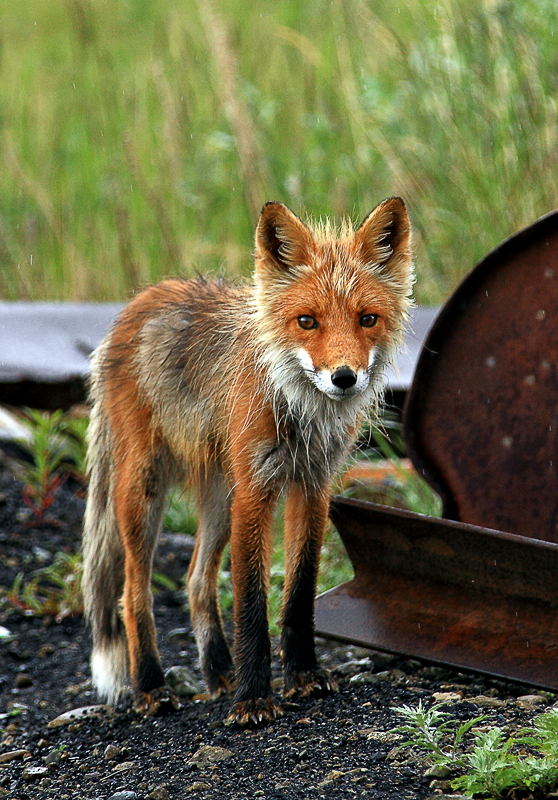 We drive along the Bystraya river to its confluence with the Colby river. The main task during the day is to go down to the mouth of the river Colby, before it flows into the Anadyr Bay. In order not to repeat the past mistakes of crossing the river at high tide, we decide, if possible, to immediately keep to the bank we need. This is not always possible due to the rising water level after rains.

Closer to the mouth of the river, pink salmon started to spawn. It is strange that there were only two bears. Apparently, they are still on the way.

Rafting down the Colby without any problem, we reach the sea in the evening. Jumping and bouncing on the rocks, we begin to crawl along the shore. The tide is in full swing and the sea begins to slowly push us to the steep coast.

It’s time to stay for the night, but we can’t find a suitable place. We reach a small patch between the rocks, and drag the equipment onto it. It seems okay, more or less, except for the bear trail that passes nearby…

We set up a tent, enclose it with Quad bikes. That’s all… let’s sleep… 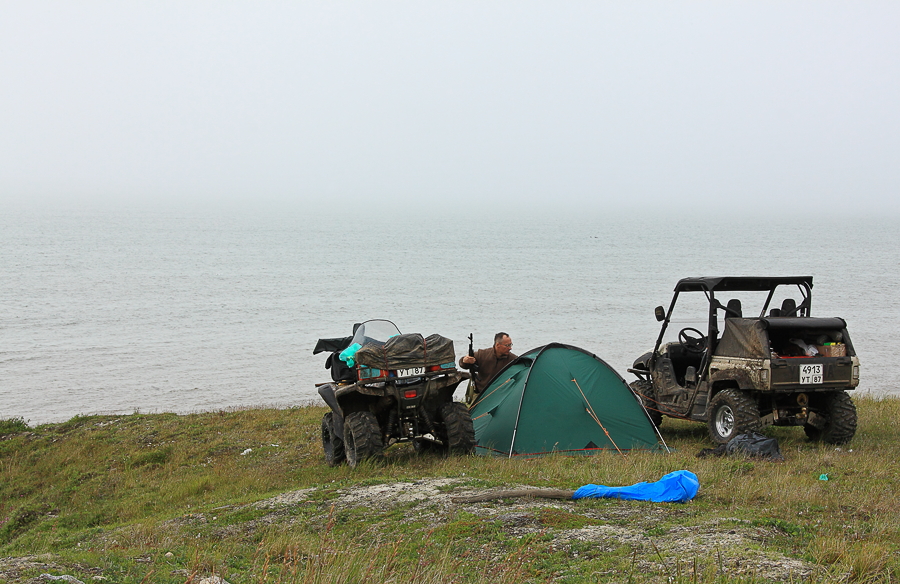 Morning. Feeling a bit sleepy, we barely crawl out of the sleeping bags. Not only did the presence of the trail not add to the calm, but at about five o’clock in the morning, we were awakened by the roar of walruses sailing past the shore.

We have a quick breakfast, break camp, and set off. The rocky pressure does not allow moving along the coast. We crawl to the top and continue our way along the hummocky tundra.

Cape Nizkiy is on the horizon. 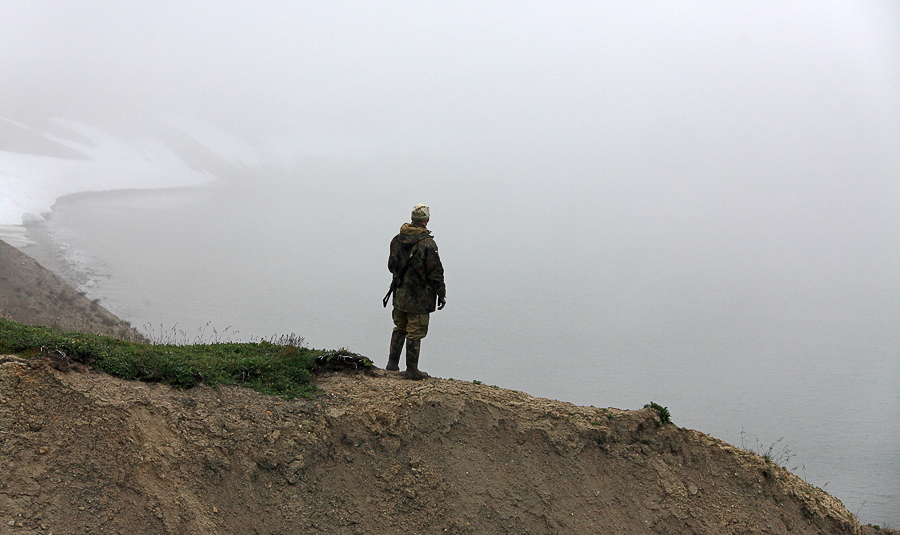 On the way to the cape, we drive up to an abandoned grave.

Who are these guys? In the name of what official duty did they die here in 1953, and why are their names cut off on the tablet? All this remains a mystery to us. Having cleaned the grave up a little, we move on. The rising wind is slowly pulling on the whitish wisps of fog. 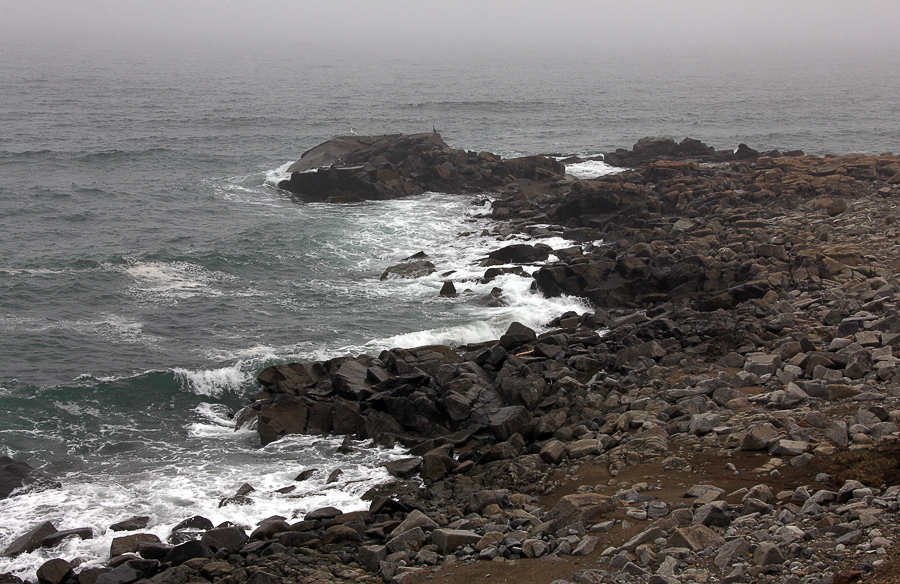 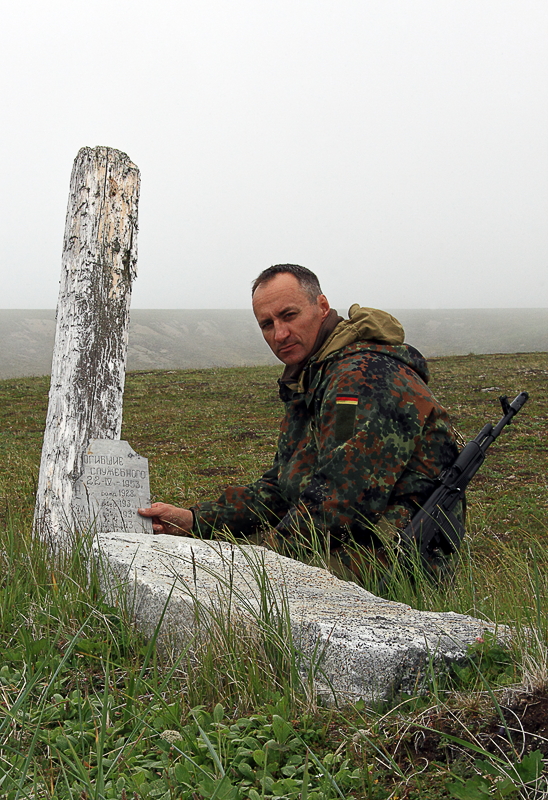 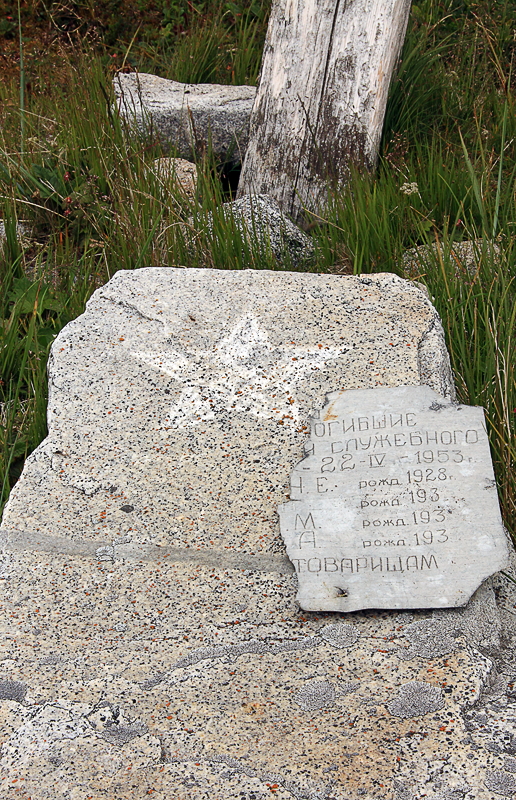 Having passed Cape Nizkiy, we jump off from the tundra and merrily roll along the sandy shore. Until we reach the wide mouth of a river that flows into the sea. 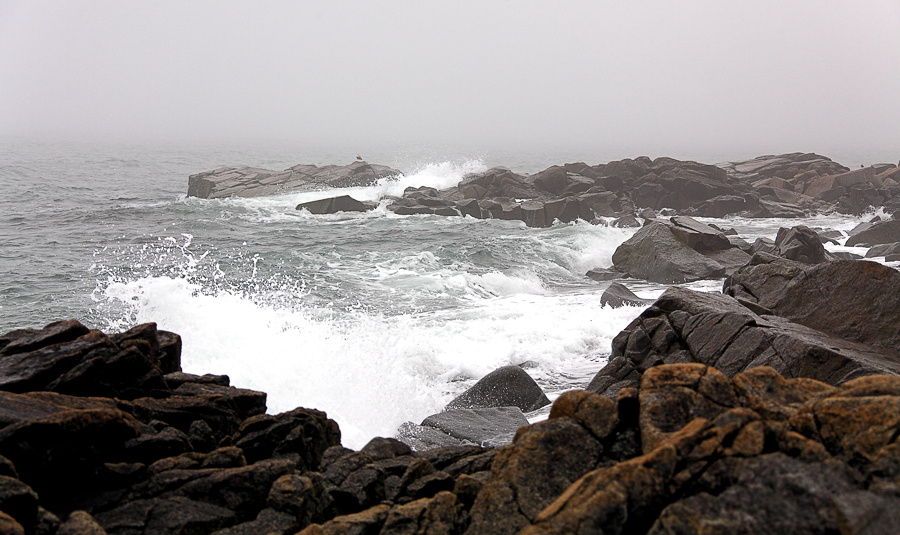 We don’t even remember that river. After some discussion, we decide to drive upstream to find a ford. We drive about a kilometer, there is no ford in sight – a steep bank and straightaway depth.

The drizzle slowly turns into rain. And what a rain it is! Nonsense! Apparently, we will have to turn back — there is no way to cross this river.

Well, let’s go back… The fact that the rain stops at the entrance to Colby and the sun begins to show through is no longer surprising. 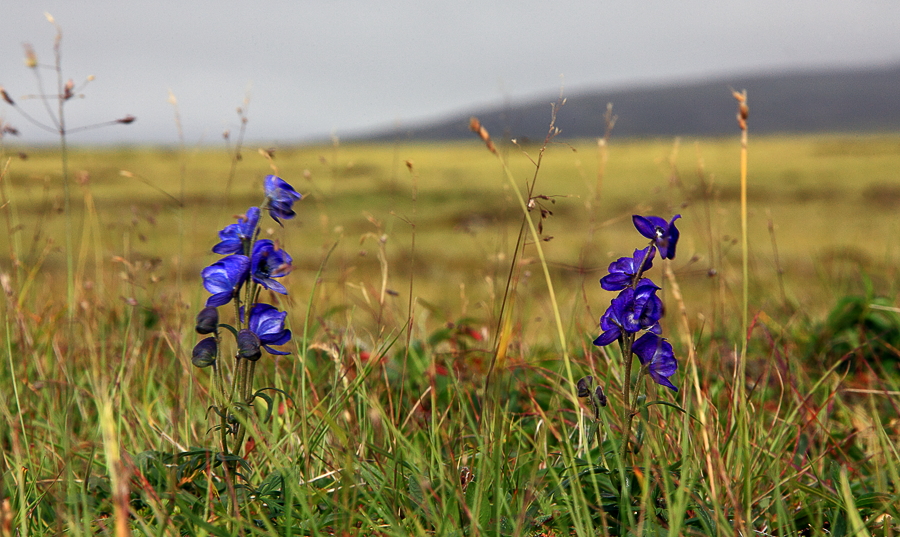 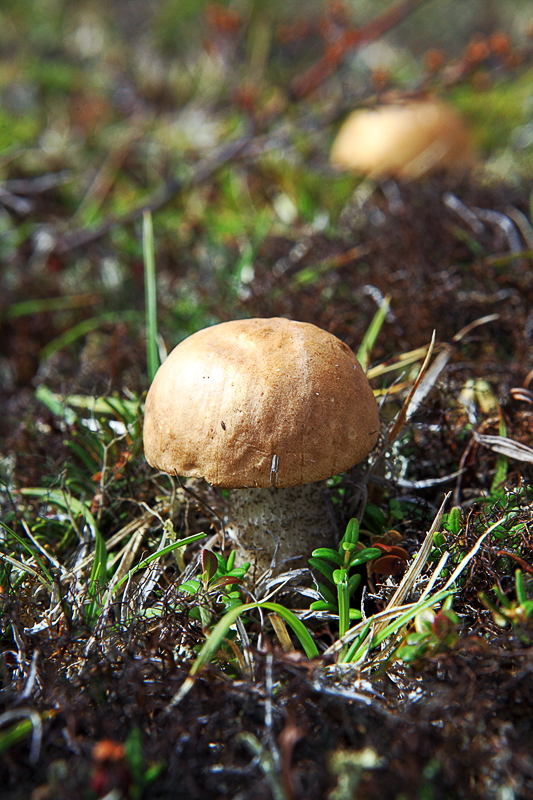 While waiting for the low tide we measure the depth and quickly, jump over the river. I can’t believe that last summer Sergey drowned his Quad bike here twice.

Along the coast of the bay we get to the balok (Chukchi’s fishing house). We unpack, but before we rest and dry, we decide to go fishing.

We go fishing to the Keimletkulveem river. Shoals of pink salmon, pressed from the sea by seals and beluga whales, fly into the narrow and shallow throat of the estuary. And although the pink salmon is no longer taken with spinning, stones and legs on fishing have not yet been canceled.

In the balok we cook fish soup, fry fish, make caviar. In the evening, we hear the sound of an engine — this is another participant of the “Chukotka Quad movement” — Igor, who lives in the Fourth town.

Although we know each other only in absentia, through mutual friends, contact has been established quickly.

The weather does not spoil us in the morning – it’s foggy and rainy. No one wants to sit in the balok all day, so after a short discussion we decide to go to Cape Russian cat. Take a walk, and at the same time look for “gifts of the sea” — walrus fangs.

The whole coast was covered with a thick cap of foam. It feels like driving through snowdrifts. 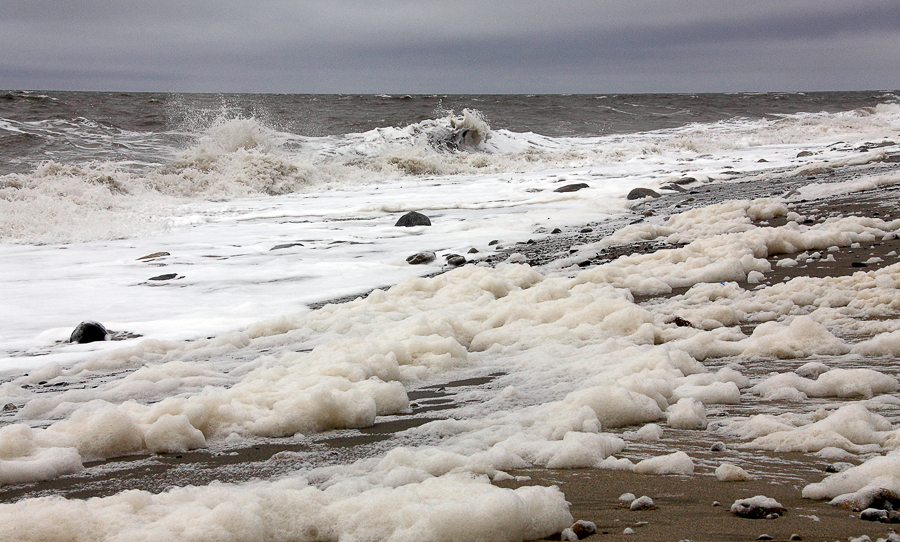 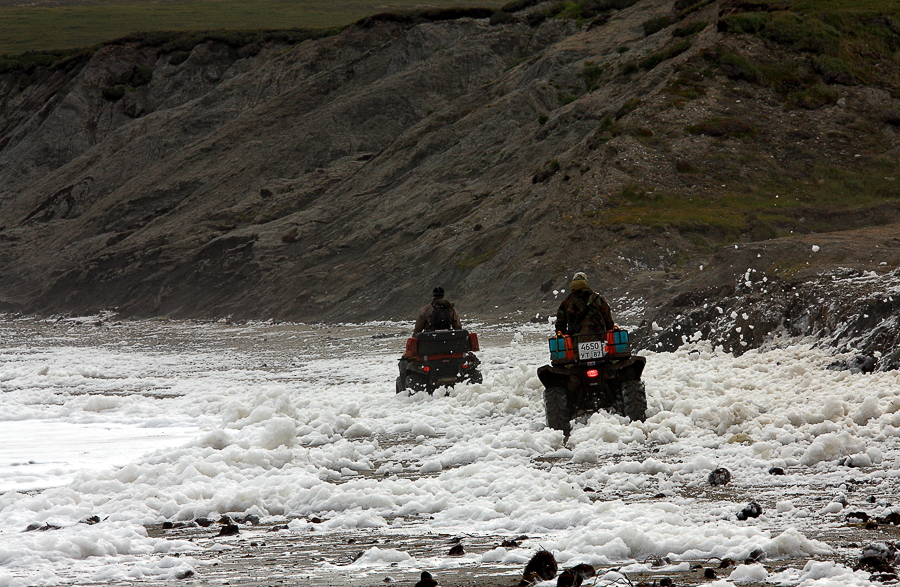 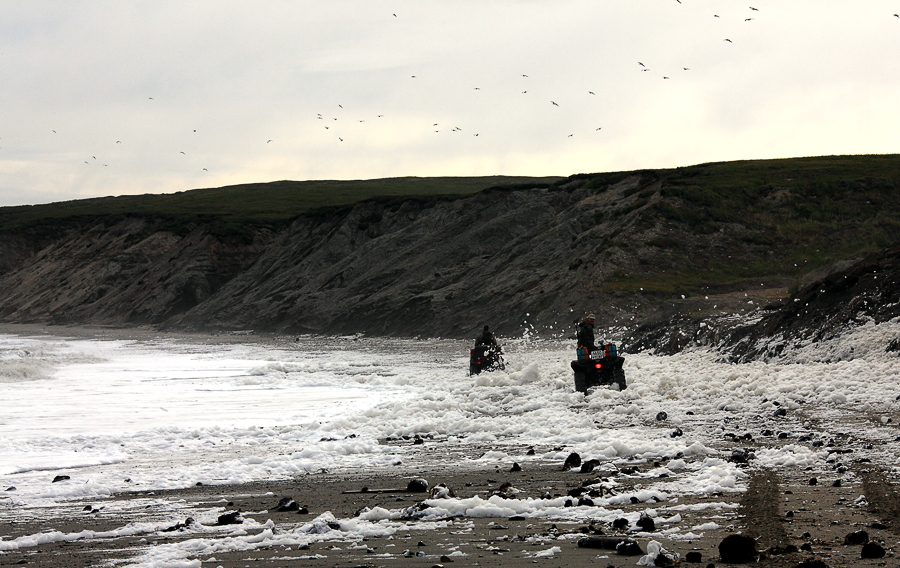 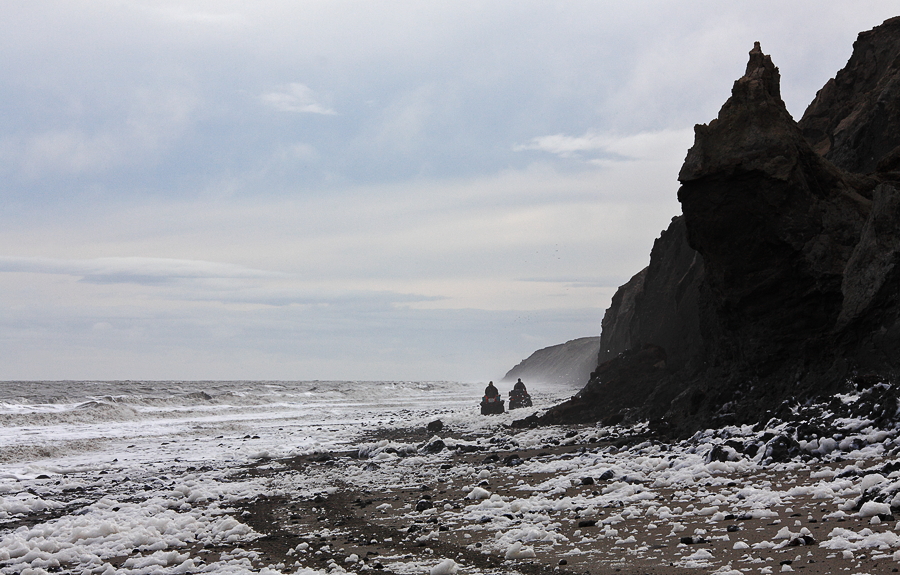 “UFO” over the Russian cat. 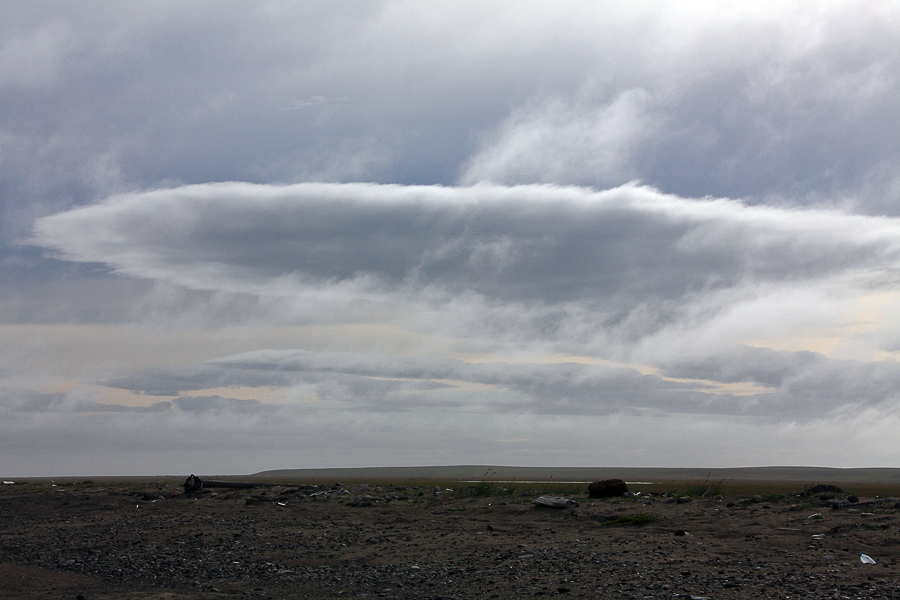 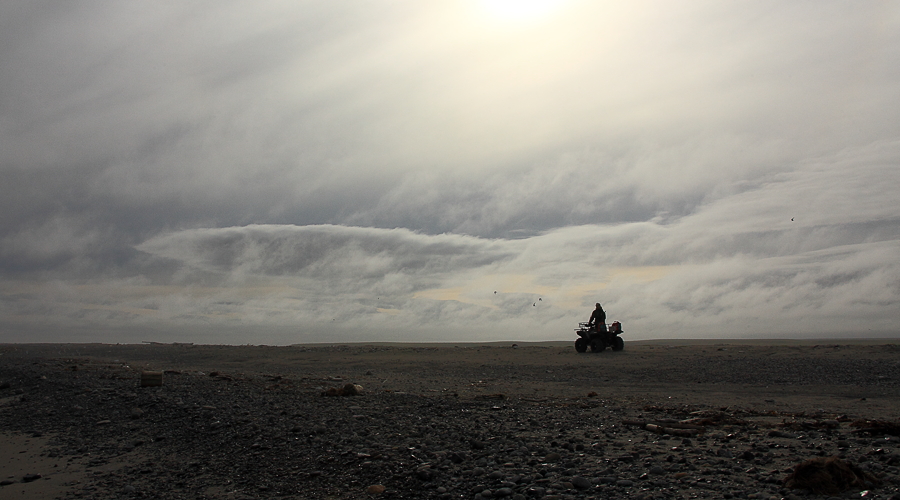 In the evening Igor leaves for home. We are staying for another day.

We have new neighbors. 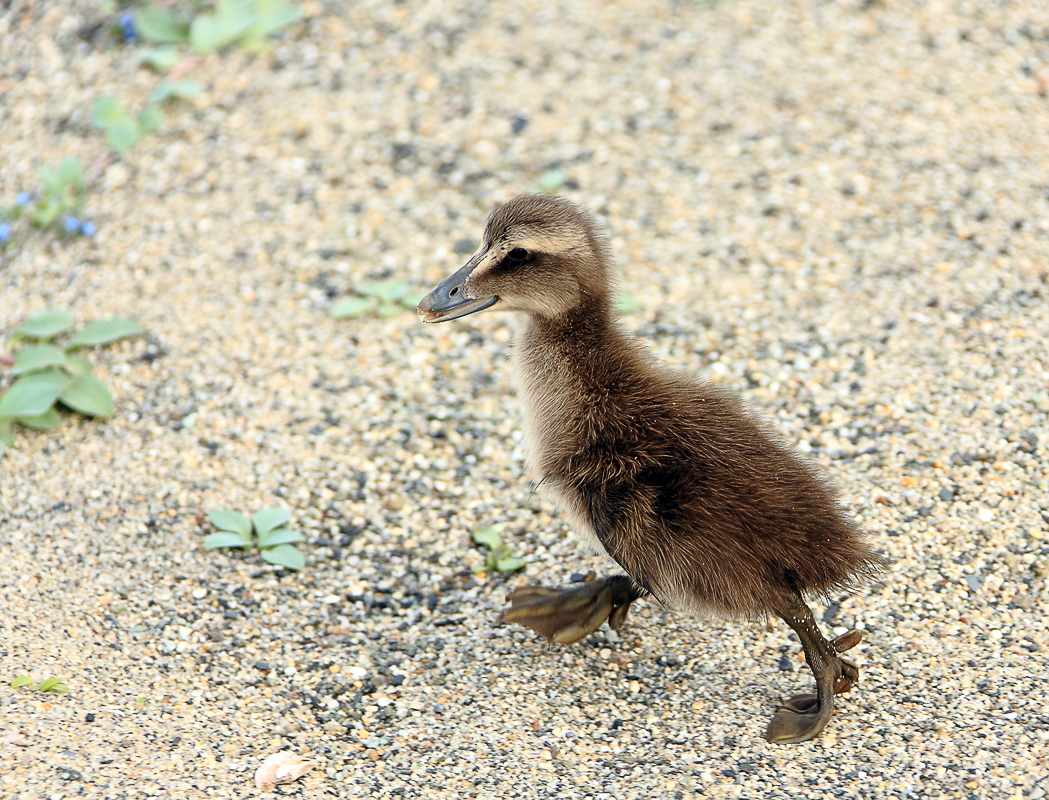 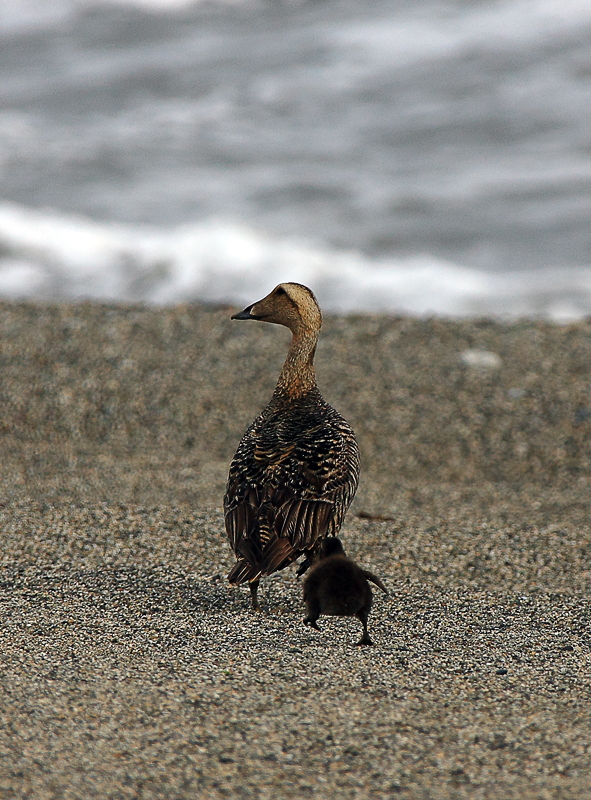 The weather has cleared up in the morning. Partly cloudy, the sun is still visible. It’s time for us to move forward. 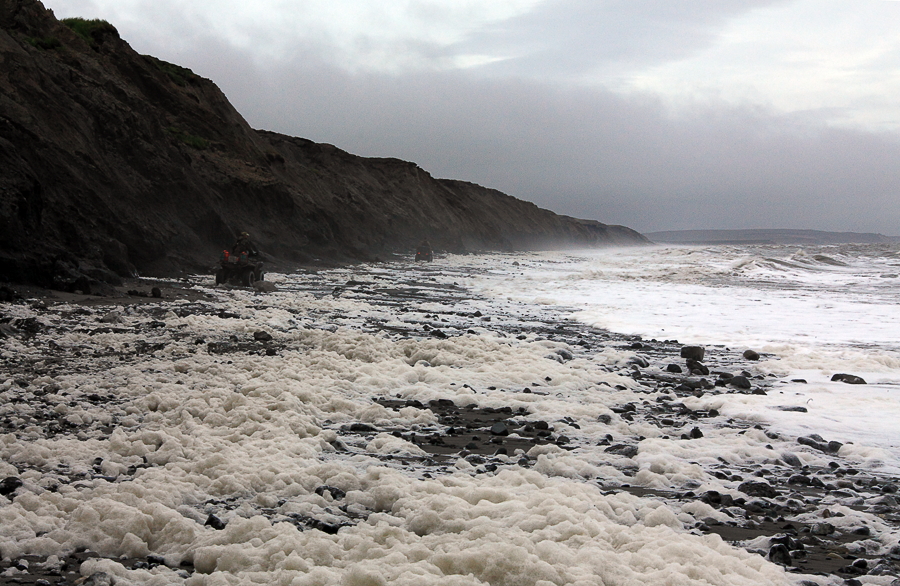 We go up the river Keimletkuulveem. Apparently, the main course of pink salmon has begun. The whole river is full of fish. Well, the “fishermen” also started to catch up. In two hours of driving along the river, we have already seen a dozen bears fishing. 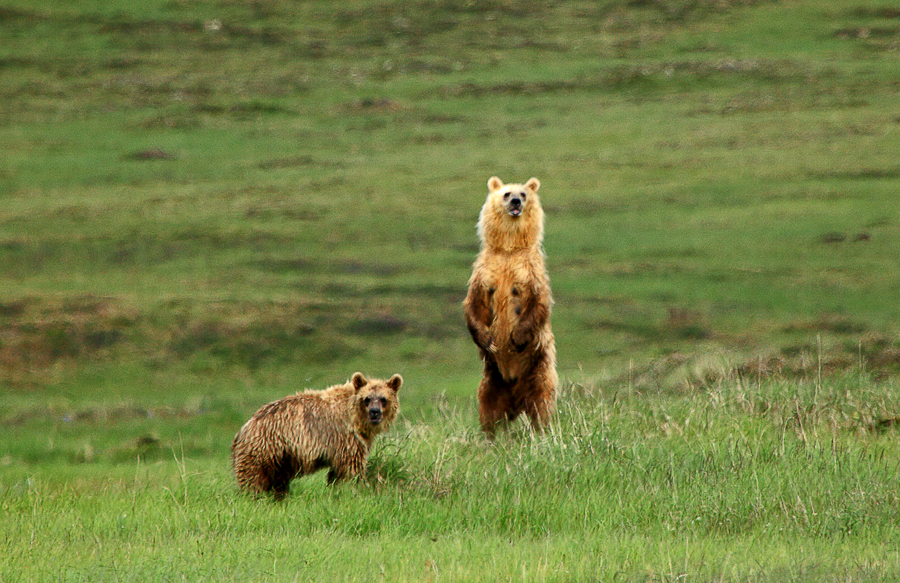 Four and a half hours later we are at the mine.

Yes … Apparently the people have been partying hard here at the weekend … Can’t even call them people…freaks! Made such a mess…

Our reasoning is interrupted by the sound of the ATV engine. Sasha Yanchuk drove up. After greeting, he briefly tells what has happened to the mine.

Since Sasha also planned to go to the city, we decide to go back together. After refueling and having a snack, we move out from the Bystryi. 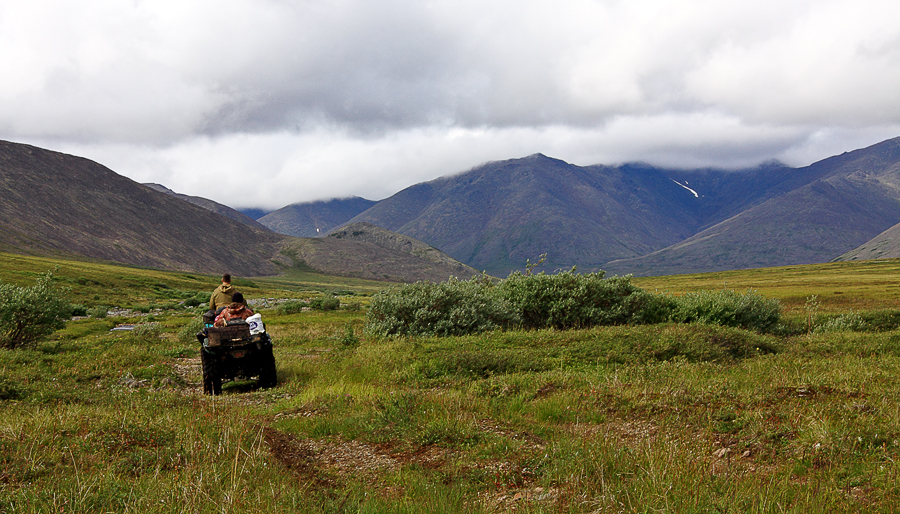 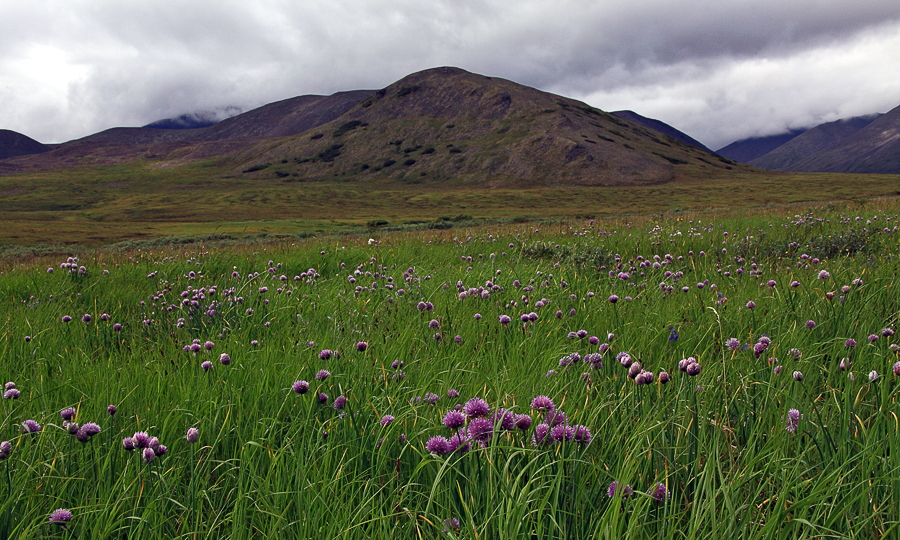 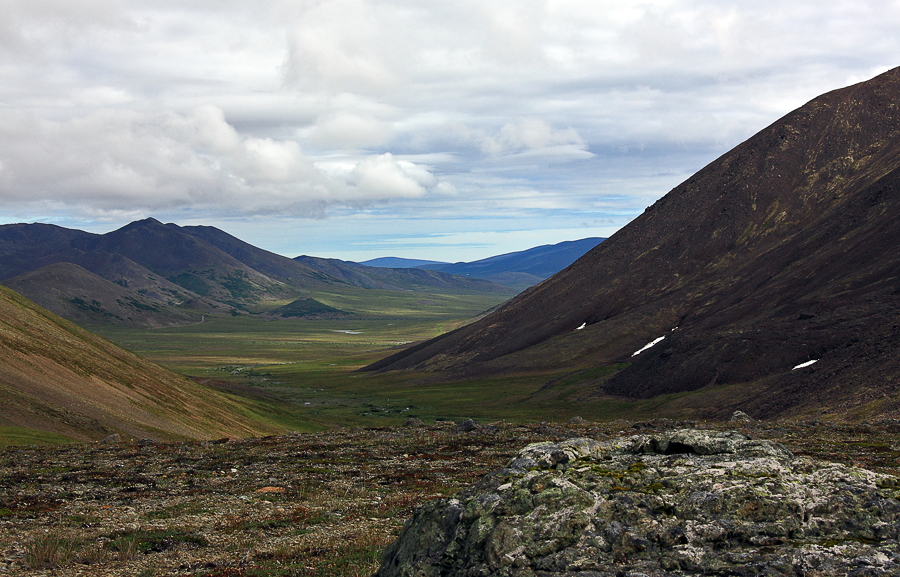 Three hours later, we’re at pier Seven. The trip is over. We are waiting for the barge.

Already, at home, we look at old and new photographs and discussed a failed trip. It suddenly turns out that on two previous trips, the river that stopped us this time, was calmly crossed by us – we went up a little further upstream. Water was knee-deep there. We were only half a kilometer away from the final destination.

We still can’t understand why we failed to recognize this river… It’s just a hassle, nothing less…